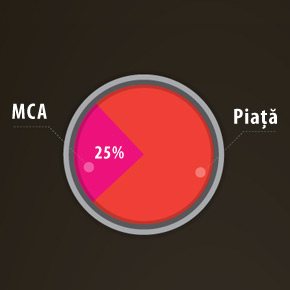 MCA, the Biggest National Garage Door Producer, aims at 25% of the Market

At the end of the first nine months of 2010, MCA the biggest national garage door producer obtained the same amount of sales as it did in 2009. Although, the first months of 2010, were weaker, in August and September the numbers of MCA garage doors increased with 40% in comparison with the same period of time in 2009.

MCA is betting on an increase in market share from 15% in 2009, to 25% in 2010. This evolution is based first hand on a growth of product quality as well as on decreasing the prices because of the production costs efficiency strategy.

“Due to the fact that value of garage door dropped with 34% in 2010, our success stands in the quality perfection and cost reduction. Until the end of 2010, MCA will cover 25% of the garage door market, in comparison with 15% that we had in 2009.”