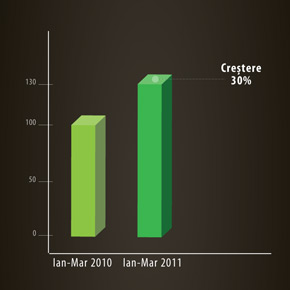 MCA, the biggest national producer of sectional garage doors, registered a 30% increase of production in the first 3 months of 2011, in comparison to 2010.

The first trimester of 2011 was the best one, in comparison to the other trimesters in the last 4 years. Because it has solidified its position on the market in the years 2009 and 2010, and because of a mild winter, the delivered orders made at MCA factory in Jilava increased by 30%.

Although, from the start of the year, MCA focused on export activities, orders in the first trimester were 90% from the domestic market.

For the year 2011, MCA forecasts a garage door and rolling shutters market stability. Until the end of the year, MCA planned to reach a turnover of 10 million Euros, and 30% from this sum is to be made from export selling.

MCA strategy for the following years is to get into the European Market and to bring money to Romania. “Although, our efforts are shadowed by the European’s perception of Romania, the quality of MCA products and services will bring profits in the following period of time.”