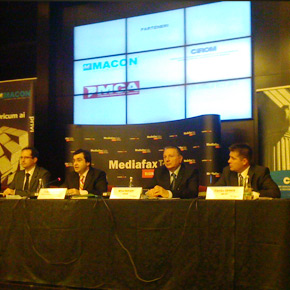 Ciprian Oprea, MCA General Manager, was invited by MediaFax to speak about the garage door and rolling shutters market evolution and tendencies in Romania

Ciprian Oprea, MCA General Manager, being the biggest national producer for industrial sectional doors, sectional residential garage doors and rolling shutters, was invited to attend MediaFax Talks in order to present today’s image of the market’s evolution and tendencies for the following years.

PThe sectional door market in Romania is strongly interconnected with the number of construction/ building constructions authorizations issued by certified authorities and for the year 2011 it is believed that a decrease of 5% will be felt in the market followed by an increase of approximately 10% in 2012.

As part of the discussion about the “Thermal Rehabilitation of the Apartment Buildings Program”, Mr. Ciprian Oprea presented the conclusions of a study conducted by European Solar-Shading Organization

The study conducted by Euroepan Solar-Shading Organization is available at the following address: www.es-so.com.