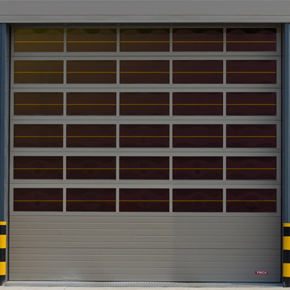 MCA Will Produce Energy for the Entire Household

MCA, the main garage doors and rolling shutters producer in Romania will invest in the development of sectional garage doors built with photovoltaic panels. These doors will gather the solar energy, representing a state of the art solution in order to produce electricity coming from alternative sources.

Architects and designers are focusing on finding new ways of optimizing energy consumption reduction and on developing as much as possible the recycling methods in order to apply them for newly built constructions. Taking into consideration that sectional garage doors can occupy up to 50% of the surface of a buildings’ façade, we can state that the implementation of a technology based on photovoltaic cells would be of great effectiveness.

Nowadays, electricity resulted from renewable resources represents only 9% of the total world consumption and by 2020 it is believed that it will rise up to 16%, according to “The Energy Information Administration”.

The total number of human population is approximately 7 billion. People who use electricity produced in 16.000 power plants that run on coal, which translates into approximately 18.7 Terawatts, as it was in the year 2010. At the current rate of development, in 2030 we will need, according to the estimations, about 30 Terawatts and in order to obtain that level of power an extra 11.000 conventional power plants are needed.

Solar energy was tested in the Bell Research Center in 1954, a priceless discovery if we keep in mind that the sun has the electrical potential of 100.000 Terawatts per day, therefore, the electricity produced by the sun in an hour can easily cover the world annual electricity consumption.

The photovoltaic cells are of two kinds: crystalline silica and organic film. The latter can apply on almost every surface, being also cheaper, being only 80 dollars/m². Moreover, until 2014 the organic film could cost only 35 dollars/ m² as shown in the estimations made by “The National Renewable Energy Laboratory”.

The possibilities offered by the organic film cells are practically endless. They can be applied on a large number of solar exposed surfaces such as on overhangs, tents or umbrellas or even windows, doors, purses, backpacks or other products with decorative purposes.

The photovoltaic system can be interconnected with the public electrical system so that it could help powering up a whole building or it could be self-sustainable in which case it will assume the role of a fully functional electric supplier. .