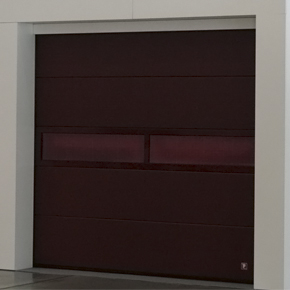 The Equip Baie Paris Fair is one of the most important events in Europe, specialized in sectional doors and roller shutters. This year the fair takes place on 13-16 November 2012. MCA’s prototype will be exposed at U70 stand in pav 1.

The energy producing garage door captures the solar energy through OPV (Organic PhotoVoltaic) technology, using it for the door’s automatic operation, but also for other domestic needs.

MCA’s Power Door project was started after a series of debates with a group of architects which aim to develop „Energy Plus Buildings”. This type of buildings are perfect for areas where connecting to conventional power sources is difficult, because they not only produce the amount of energy they need, but also can deliver the extra to the community.

And as the garage door can occupy a large surface on a building’s façade, we can conclude that OPV technology will be one of the architects’ most common choices.

Moreover, the solar energy captured by the garage doors can be used for charging electric vehicles.

The system presented by MCA is formed by two OPV panels that capture the solar energy, made by a polymer that has the capacity of transforming the solar energy into electric power.

The two OPV panels produce 30 Volts and 90 mA, having the possibility to completely charge the garage door’s battery in only 10 hours of solar exposure. With this amount of energy the door can make 30 cycles. Considering a medium operation of 4 cycles the system is designed to work continuously without other power source.

After 4 hours of solar exposure, an OPV door can function for 20 minutes (aprox. 10 cycles). For comparison, with the same amount of energy a laptop can work for two and a half hours and an ecological 8 W light bulb – for six hours.

As the National Renewable Energy Laboratory estimates, until 2014 OPV solar panels could cost 35 dolars / sq. m. Having in mind that garage doors can produce more energy than they need to function, the investment can easily be recovered in time.

Organic film cells offer unlimited possibilities, as they can be applied on a large range of surfaces exposed to solar lightening, starting from car covers, umbrellas, tents, windows and doors and also on backpacks or decorative objects.

During the Equipbaie Fair, MCA will present its latest developments:

MCA is the leading sectional doors and roller shutters manufacturer in Romania. MCA brand is owned by Milca SRL Company based in Romania, Giurgiu. MCA Grup reached in 2011 a turnover of 8.2 million euro and expects an important advance in 2012.

MCA exports its products to major European markets such as: Belgium, France, Austria, Serbia, Bulgaria, Hungary, Italy and Republic of Moldova. The MCA factory from Jilava, located near Bucharest, Romania’s Capital, is the biggest factory in the garage doors industry in South-East Europe and has a production capacity of 10,000 sectional doors and 15,000 roller shutters per year.