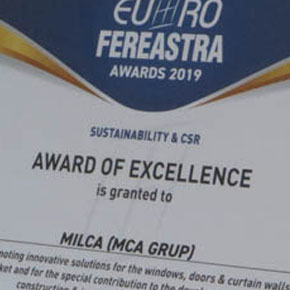 Sustainability and CSR excellence prize at the EURO-Fereastra 2019 Awards

During this year's edition of the EURO-Fereastra International Conference on Carpentry and Facade Systems, which took place on May 19th in Bucharest, the MCA Group was rewarded with a new prize. This was offered during the 6th edition of the EURO-Fereastra Awards for its outstanding results in 2018 and its contribution to the development of the of the specific sector of activity.

MCA Grup has received the EURO-Fereastra Trophy in the Sustainability and CSR section, the jury of Fereastra specialty magazine particularly appreciating its sustained efforts in this direction. The MCA name thus ranks among the most important companies on the national insulating carpentry market and in related fields that were awarded at the event for business excellence and the promotion of innovative solutions.

In 2018, the MCA Group completed the relocation of its production activity in Popesti-Leordeni, where a new factory, with office spaces, has become operational. The company has also expanded its staff number, presently consisting in approximately 130 employees. The constant concerns of the management team include providing permanent automated production processes that continually increase product quality and continuous qualification of employees.

The MCA Group has also been awarded in two previous editions of the EURO-Fereastra International Conference on Carpentry and Facade Systems, namely: 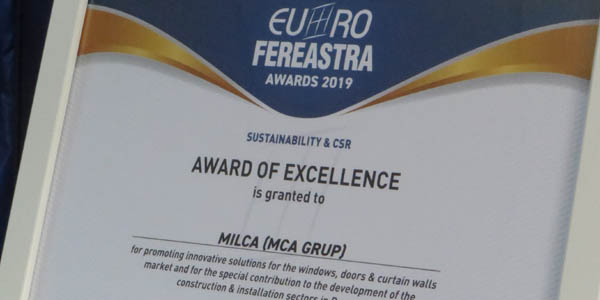 The 11th edition of the EURO-Fereastra International Conference on Carpentry and Facade Systems held by Fereastra magazine took place simultaneously with the 8th edition of the EURO-Constructii International Conference on Sustainable Construction and Energy Efficiency, organized by Agenda Constructiilor magazine, a member of the same press trust. The two annual events were carried out in 2019 with the support of numerous professional associations in the construction industry and was attended by more than 300 participants.